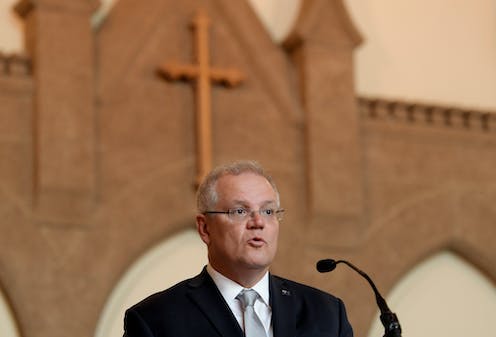 The ABC recently reported on the “infiltration” of Liberal Party branches in regional Victoria by Pentecostals, on a mission to influence Liberal Party positions on so-called morality issues such as abortion and LGBTIQ+ rights.

This isn’t a new development. In the middle of 2021, the Liberal Party memberships of hundreds of people linked to Pentecostal churches in South Australia created significant controversy and led to an internal investigation.

And in 2018, concerns were being raised about the growing influence of the Christian Right in the WA Liberal Party.

There’s no doubt Morrison’s religion and his government’s disastrous attempt to legislate a religious discrimination bill have stirred up renewed public debate about the relationship between religion and politics.

Much of this debate has centred on the interests and influence of conservative and fringe Christian organisations and lobby groups.

It has also drawn attention away from the religious freedom abuses perpetrated against First Nations peoples and the prejudice and discrimination being experienced by people of other religious groups, including Muslims, Jews, Hindus and Sikhs.

Debates about the appropriate place and influence of religion in this secular state have flared up at various times over the last 200 years or so. The Constitutional debates ahead of federation in 1901 included the question of whether the (Christian) God should rate a mention in the new Constitution and, if so, where.

In 1973, then Labor Attorney-General Lionel Murphy attempted to legislate a human rights bill but faced strong opposition from almost all churches arguing against the inclusion of protection for religious freedom.

But until Morrison, we had never had a Pentecostal prime minister – one whose version of Christianity is so strange to most Australians.

Christians, atheists and journalists alike were engaged by both his policy agenda and expressions of religiosity. These included:

Read more: 'No religion' is Australia's second-largest religious group – and it's having a profound effect on our laws

What to watch out for

So, after three years of focused attention, did the Morrison government, or Morrison himself, change the relationship between religion and politics in our increasingly non-religious and religiously diverse nation?

While it’s too early to be sure, there will be clues. Here are some things to watch out for.

If the Albanese government doesn’t move to legislate a religious discrimination act, it will be a sign the Morrison government has made it diabolically difficult to address religious freedom in a way that doesn’t pit people against each other and undermine the rights of the LGBTIQ+ people. Legislating a human rights act or charter would be more fruitful.

If, on the other hand, the government tables a more modest religious discrimination bill then, regardless of any ongoing political mobilisation of the Christian Right, we may settle back into the pattern of occasional confusion about where to draw the line in our not-quite entirely secular nation.

It’s worth noting here that, as University of Sydney academic David Smith has written for The Conversation, the Christian Right is not good at winning policy battles, even when it wins elections.

The Morrison government set in public consciousness the idea that religious freedom and equality rights are irreconcilable. This gave the culture warriors (religious and irreligious) both permission and an excuse to continue their ongoing persecution of transgender people.

If the Morrison government’s approach to religious freedom has stuck, “religious freedom” will continue to provide the culture warriors with cover for any number of pet causes.

How we talk about religion

The “statements of belief” clause in the failed religious discrimination bill represented a white, western, Protestant understanding of religion as individual and autonomous consent to a series of “beliefs”, especially about “moral” issues.

The alternative is to reframe religion in a way that reflects the diversity, richness and complexity of religion in the lives of people and communities.

If we fail to do this, then the Morrison government will have indeed made a lasting, and damaging, impact on the relationship between religion and politics in Australia.