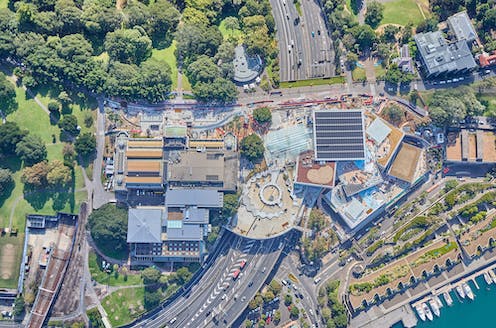 In 1972, when the Art Gallery of New South Wales opened its first modern building, it was rightly praised for its innovative design.

Architect Andrew Andersons incorporated the latest aspects of museum architecture. The egg crate ceilings were designed to reduce noise for people walking on its marble floors. There were moveable screens that looked like walls and adjustable light levels for fragile art.

But where the building faced Sydney Harbour, Andersons placed a giant window. The intrusion of reality into art connected visitors to the world outside.

It was revolutionary for the time, a marked contrast to the giant granite box of the National Gallery of Victoria, opening in 1968. The Melbourne building had followed the standard model of museum design of eliminating windows to maximise hanging space.

Just over 50 years later, the Sydney Modern expansion under architecture firm SANAA could be described as putting Andersons’ approach on steroids. It will open in December but in recent weeks small groups of visitors have been given preview tours, while installation crews make the finishing touches.

A gallery for Indigenous art

The relationship of Sydney Modern to the older building echoes Andersons’ uncompromising but sympathetic linking of his 1972 construction to the original Grand Courts designed by Walter Liberty Vernon.

The new link between the two buildings includes an installation honouring the history of Country by Wiradjuri and Kamilaroi artist Jonathan Jones.

This new building is very aware of its physical and spiritual location. It is dominated by the light from its soaring glass walls. The ground floor entrance feels like walking into a crystal.

In a nod to Andersons’ first glorious window, the Yiribana gallery of Indigenous art has a window facing the harbour so visitors can see where the Gadigal ancestors first witnessed the arrival of convicts in 1788.

The relocation of Yiribana from the basement of the older building is a physical manifestation of the significant shift in Australia’s understanding of its culture.

In 1958, the gallery’s deputy director Tony Tuckson facilitated collector and surgeon Stuart Scougall’s gift of Tiwi Pukumani grave posts. For the first time Indigenous work was shown as art and not anthropological artefact.

In late 1973, funding from the arts programs associated with the opening of the Sydney Opera House enabled a permanent installation of Melanesian art, another gift from Scougall. It was accompanied by what the trustees thought would be a temporary exhibition of Aboriginal art.

Tuckson died while the exhibition was being installed and it remained on view, in a dark little space at the bottom of the gallery’s marble stairs, until about 1980.

In 1983, Djon Mundine curated a temporary exhibition of bark paintings and the following year was appointed as part-time curator, but there was little official interest in Aboriginal art by the gallery.

The big shift came in 1991 when Hetti Perkins curated another temporary exhibition, this time of previously little-known Aboriginal women artists.

Perkins’ achievement was especially appreciated by Mollie Gowing, one of the volunteer guides.

In 1994, on the initiative of then NSW Minister for the Arts Peter Collins, the gallery opened Yiribana, its first permanent dedicated exhibition space for Aboriginal and Torres Strait Islander art.

This basement had previously been the offices and working area for the public programs department and was not an especially sympathetic space for art. It was well over a decade before Indigenous art began to be integrated into other exhibits of Australian art.

The relocation of Yiribana to Sydney Modern can be seen as the gallery’s affirmation of the importance of Indigenous cultures to any understanding of what Australia may be.

In 1972 when the newly opened gallery wanted to show its best art to the world, the main gallery was dominated by art from the United States. All eyes were drawn to Morris Louis’ Ayin.

That same space now has work by Sol LeWitt in visual conversation with Emily Kame Kngwarreye and Gloria Tamerre Petyarre.

The integration of Australian art with art from the rest of the world is a reflection of historic reality. Last century was a time of mass travel and cultural exchange, when many national barriers were breached, especially in the arts.

Sydney Modern, combined with the reconfiguring of the 20th century exhibits in the older building, is a quiet repudiation of that cultural cringe which persists in seeing Australian culture as some kind of backwater.

Although most of Sydney Modern is filled with light, its most surprising space is buried in dark.

During the second world war, when the navy fleet needed to refuel at Garden Island, the Australian government secretly built a giant underground fuel storage tank, its true depth hidden below the water line.

Now a spiral staircase leads the visitor to the Tank, a magical space of oil-stained columns and echoing sounds. Right now it is empty, but within weeks the Argentine-Peruvian artist, Adrián Villar Rojas will begin to create a new work, The End of Imagination.

There are two meanings to the title. One suggests imagination is now dead. However, by being placed at the core of such an inspirational space it seems Rojas may be suggesting a culmination of imagination, a questioning of what imagination may be in these days of the Anthropocene.

The work is not yet made. As with the rest of the art that will fill this magical space, we will have to wait and see.

Read more: Cities are made from more than buildings and roads. They are also made by ambiences – how a city makes you feel