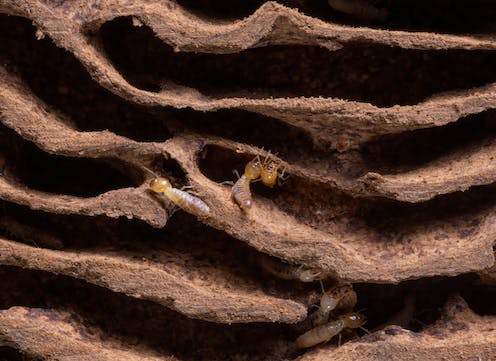 When we consider termites, we may think of the danger they can pose to our houses once they settle in and start eating wood. But in fact, only about 4% of termite species worldwide are considered pests that might, at some point, eat your house.

In nature, wood-eating termites play a broad and important role in warm tropical and sub-tropical ecosystems. In feeding on wood, they recycle essential nutrients to the soil and release carbon back to the atmosphere.

Our new research, published today in Science, quantified for the first time just how much termites love the warmth. The results are striking: we found termites eat deadwood much faster in warmer conditions. For example, termites in a region with temperatures of 30℃ will eat wood seven times faster than in a place with temperatures of 20℃.

Our results also point to an expanding role for termites in the coming decades, as climate change increases their potential habitat across the planet. And this, in turn, could see more carbon stored in deadwood released into the atmosphere.

Deadwood in the global carbon cycle

Trees play a pivotal role in the global carbon cycle. They absorb carbon dioxide from the atmosphere through photosynthesis, and roughly half of this carbon is incorporated into new plant mass.

While most trees grow slowly in height and diameter each year, a small proportion die. Their remains then enter the deadwood pool.

Termites and microbes release the carbon stored in deadwood into the atmosphere. Shutterstock

Here carbon accumulates, until the deadwood is either burned or decayed through consumption by microbes (fungi and bacteria), or insects such as termites.

For this reason, understanding the dynamics of the community of organisms that decay deadwood is vital, as it can help scientists predict the impacts of climate change on the carbon stored in land ecosystems.

This is important as releasing deadwood carbon to the atmosphere could speed up the pace of climate change. Storing it for longer could slow climate change down.

Read more: Decaying forest wood releases a whopping 10.9 billion tonnes of carbon each year. This will increase under climate change

Scientists generally understand the conditions that favour microbes’ consumption of deadwood. We know their activity typically doubles with each 10℃ increase in temperature. Microbial decay of deadwood is also typically faster in moist conditions.

On the other hand, scientists knew relatively little about the global distribution of deadwood-eating termites, or how this distribution would respond to different temperatures and moisture levels in different parts of the world.

To better understand this, we first developed a protocol for assessing termite consumption rates of deadwood, and tested it in a savannah and a rainforest ecosystem in northeast Queensland.

Our method involved placing a series of mesh-covered wood blocks on the soil surface in a few locations. Half the blocks had small holes in the mesh, giving termites access. The other half didn’t have such holes, so only microbes could access the blocks through the mesh.

A block of pine wood wrapped to keep out termites and left in the forest to decompose.

We collected wood blocks every six months and found the blocks covered by mesh with holes decayed faster than those without, meaning the contribution of termites to this decay was, in fact, significant.

But while the test run told us about termites in Queensland, it didn’t tell us what they might do elsewhere. Our next step was to reach out to colleagues who could deploy the wood block protocol at their study sites around the world, and they enthusiastically took up the invitation.

In the end, more than 100 collaborators joined the effort at more than 130 sites in a variety of habitats, spread across six continents. This broad coverage let us assess how wood consumption rates by termites varied with climatic factors, such as mean annual temperature and rainfall.

Termites love the warmth, and not too much rain

For the wood blocks accessible to only microbes, we confirmed what scientists already knew – that decay rates approximately doubled across sites for each 10℃ increase in mean annual temperature. Decay rates further increased when sites had higher annual rainfall, such as in Queensland’s rainforests.

For the termites’ wood blocks, we observed a much steeper relationship between decay rates and temperature – deadwood generally decayed almost seven times faster at sites that were 10℃ hotter than others.

To put this in context, termite activity meant wood blocks near tropical Darwin at the northern edge of Australia decayed more than ten times faster than those in temperate Tasmania.

Our analyses also showed termite consumption of the wood blocks was highest in warm areas with low to intermediate mean annual rainfall. For example, termite decay was five times faster in a sub-tropical desert in South Africa than in a tropical rainforest in Puerto Rico.

This might be because termites safe in their mounds are able to access water deep in the soil in dry times, while waterlogging can limit their ability to forage for deadwood.

Our results were synthesised in a model to predict how termite consumption of deadwood might change globally in response to climate change.

Over the coming decades, we predict greater termite activity as climate change projections show suitable termite habitat will expand north and south of the equator.

This will mean carbon cycling through the deadwood pool will get faster, returning carbon dioxide fixed by trees to the atmosphere, which could limit the storage of carbon in these ecosystems. Reducing the amount of carbon stored on land could then start a feedback loop to accelerate the pace of climate change.

We have long known human-caused climate change would favour a few winners but leave many losers. It would appear the humble termite is likely to be one such winner, about to experience a significant global expansion in its prime habitat.

Read more: My formula for a tasty and nutritious Nigerian soup – with termites